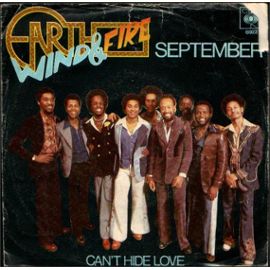 Moses Jones Rock Funk Orchestra Thoughts on party songs by Earth Wind & Fire:
September never seems to amaze me. People from all ages and races dance to this song as soon as the hear the opening. This is one of the most requested party songs around. Earth Wind & Fire have been putting out party songs for decades. The horn section and vocals really push this song to the top. Make sure you check out the video I posted. It has another song with it!!

Here it is, our party song of the day for the Party Songs series in this blog:) I hope you like it and I hope you email me more suggestions (moses@mosesjones.net). I’d love to know what you think are the best party songs of the today or of those that are timeless ~

“September” is a song by Earth, Wind & Fire written by Maurice White, Al McKay, and Allee Willis. It was recorded during the I Am sessions and released as a single in 1978. Featured on the band’s album The Best of Earth, Wind & Fire, Vol. 1, “September” reached number one on the US R&B chart, number eight on the Billboard Hot 100, and number three on the UK singles chart.

Visit our friends in the business, like Mr. J & the Smooth Expressions- Event Band
and Mannequin Band ~ Colorado Wedding Band